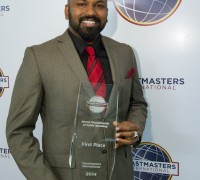 What better to improve your public speaking than by observing those who already excel in it? Our ‘Get Inspired’ series will look at different people who have delivered incredible speeches and see what made them engage with the audience.

In the first of this series is Dananjaya Hettiarachchi from Sri Lanka who won the 2014 Toastmasters World Championship of Public Speaking. His speech, entitled ‘I see something’ encompasses all the elements of an excellent speech with elements of surprise, inspiration and humour.

These are the two things I found exquisitely done in Dananjaya’s speech.

Dananjaya used the fool-proof technique of repetition very well and not only weaved it cleverly in his speech but he used his title to turn it into a catchphrase. Combined with carefully timed pauses, the impact of each time he said the catchphrase, created a real connection with his audience – the evidence is in their rapturous laughter. This is what I found made his speech so powerful and egaging.

We know body language is important to delivering a good speech (no surprise that it’s part of Toastmaster’s Competent Communicator program) and Dananjaya’s gestures and movements are done with deliberation to add drama and visual emphasis to his words. Watch how his actions when he talks about his mother crying and how the emotions you felt when he described this.

Watch the video yourself and see how many best practices you can learn from his storytelling techniques. What did you found inspiring in Dananjaya’s speech? Let me know in the comments below.

Join our meetup group and you will be notified of upcoming meetings!